The newly-built offices at Tournament Fields are double the size of the company’s original building and will the base for 82 business, marketing, IT, HR, R&D, customer support and sales employees.

The work on building was undertaken by Tournament Fields owner Sackville Developments, part of the CWC Group, and saw the creation of a 25,000 sqft building. The design incorporates the growth of Geberit following its recent acquisition of Staffordshire business Twyford and allows for future expansion.

Geberit UK Managing Director Mark Larden said: “We are incredibly excited to take up residence in our new headquarters and this definitely marks a significant milestone in our company development.

“It was only eight years ago that we moved into our other purpose-built building on Tournament Fields, having relocated the business from Kent.  However, thanks to our strong growth trajectory we outgrew that premises in just a few short years and we were more or less bursting at the seams just before we moved.

“I’m delighted that the whole team is freshly enthused by the fantastic new building and critically we have plenty of room to grow; which is important because we have ambitious plans.”

Paul Shanley, director at Sackville Developments, said: “We are very pleased that Geberit’s new headquarters has been completed on time, within budget and look forward to seeing staff move in later this month.”

To ensure the company could make the most of the opportunities the larger headquarters offer, EHB Commercial assisted Geberit in securing the building but have also negotiated the disposal of their former impressive headquarters.

Simon Hain, a director of ehB Commercial, said: “We’ve gone full circle really as it was us who found their current headquarters, Geberit House and now their new one.” 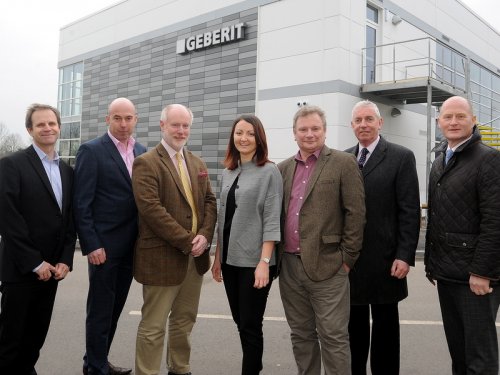