A multi-national group is on track to move into its new £5 million headquarters early next year.

Swiss-owned Geberit is Europe’s largest manufacturer of sanitary ware, with a global presence through its subsidiaries. After being based on Tournament Fields on the outskirts of Warwick for the past seven years, it will now be relocating across the road to new purpose-built offices and showroom.

Managing director Mark Larden said: “We are all very excited about the new building, which we can see from our windows rising up opposite; on track to be opened in January or February next year.

“Everyone is very positive about the move and is excited about the new showroom, which will be state of the art.

“We wanted to stay on Tournament Fields as it’s well-placed for motorways and rail links and well suited to our expansion plans, so this is ideal for us.”

Simon Hain, a director of ehB Commercial, said: “We’ve gone full circle really as it was us who found their current headquarters, Geberit House – which we are imminently about to bring to the market – and now their new one.”

Mr Hain said the new headquarters would be a 22,500 sq ft two-storey building – twice the size of Geberit’s current offices.

Geberit recently acquired Twyford, the 150-year-old Staffordshire manufacturer of bathroom fittings, whose staff will be among the 70 employees moving to the new building next year. 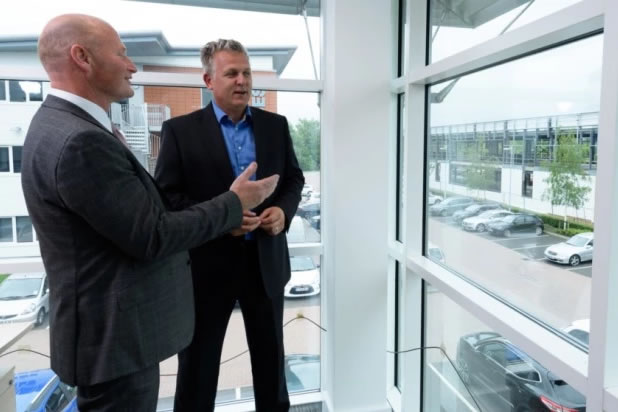